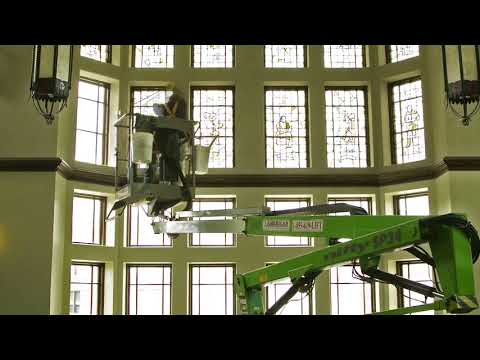 Finishing touches for the Ruane Center

The Ruane Center for the Humanities, which opened in 2013, has received some finishing touches.

The windows were designed by Sylvia Nicolas ’01Hon., a fourth-generation, master stained-glass artist from Mont Vernon, N.H. Nicolas’ work can also be seen in St. Dominic Chapel, where she designed the stained-glass windows, the six-foot crucifix above the altar, and the Stations of the Cross.

The windows were built and installed by Mark Liebowitz and his wife, Nancy Katz, stained-glass designers and fabricators who own Nancy Katz/Wilmark Studios in Shelburne Falls, Mass. They were a gift from Michael J. Joyce ’84, a member of the PC Board of Trustees, and his wife, Jane Aries Joyce ’89. The Jane Austen window contains the initials C.M.J. to honor the Joyces’ daughter, Caroline, who has Rett syndrome, a neurological disorder.

Four marble statues representing the cardinal virtues — prudence, temperance, justice, and fortitude — now grace the Ruane Center entrance thanks to a gift from Christopher J. Walker ’86 and Susan Tower Walker ’86, the parents of Colin Walker ’20. The statues were manufactured in Italy by Demetz Art Studio through a connection made by Philip J. Tally ’86 of Tally’s Church Supply in Cranston, R.I. The statues have special meaning for Susan Walker, who was an art history major at PC.

Read more about the stained-glass windows.

Giving back reflects being ‘given so much’